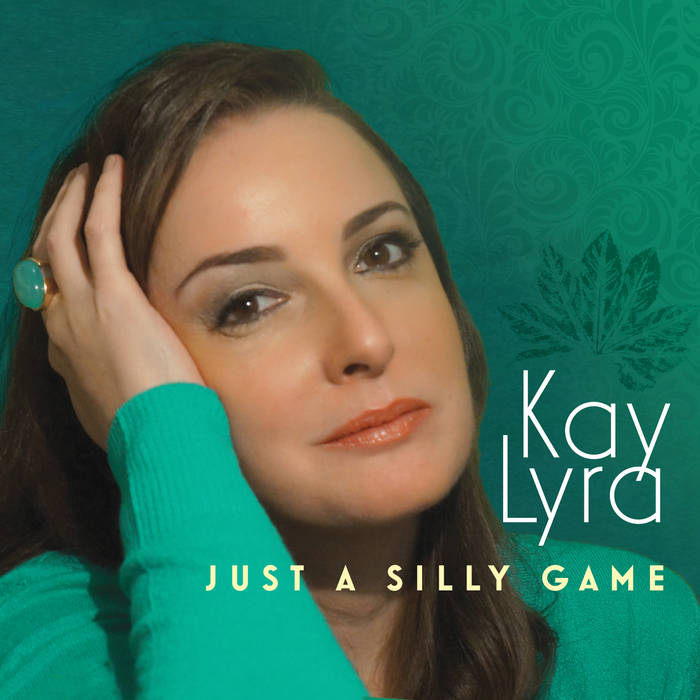 There is a certain quality that exudes from Brazilian culture. A je ne sais quoi. The jeitinho brasileiro. The Brazilian way…. This conceivable but unexplainable essence is reflected in attitudes, styles, arts and sports. For many, this quality is most evident in Brazilian music and most heralded in the unique form of bossa nova.

Singer/songwriter Kay Lyra maintains that bossa nova is more than just a stationary genre label. There is a jeitinho that is bossa nova. It is more than a specific rhythm or harmonic structure, as it has been defined by codifiers since the overwhelming popular acclaim for the music of Joao Gilberto. The essence of bossa nova can be applied to many musical forms, from folk and classical to rock and jazz.

On her new recording, Just A Silly Game, Lyra sets out to prove that the spirit of bossa nova can shine through, regardless of genre. Among her collaborators on this recording are luminaries such as Boca Livre vocalist/multi-instrumentalist/arranger Mauricio Maestro, guitar guru Chiquito Braga, and harmonica ace Mauricio Einhorn.

Lyra’s lineage comes straight from the roots of bossa nova. Her father was the legendary composer Carlos Lyra, who, along with Tom Jobim and poet/lyricist Vinícius de Moraes, created the beloved musical style. So bossa nova is in her blood. Although not formally trained, Lyra picked up much from her father. She recalled time spent with him listening to music on his ranch, picking up his influences from the classical music of Debussy and Chopin to Mexican boleros to versions of show tunes made popular by Fred Astaire and by Ella Fitzgerald, who would turn out to be the younger Lyra’s favorite singer.

Because of her American mother and dual citizenship, Lyra was able to spend time in the United States and even studied for a time at the Berklee College of Music in Boston. After some time in Europe doing odd jobs, she found herself coming back to music and Brazil. It was while she was performing at nightclubs in Rio de Janiero that Lyra met Mauricio Maestro.

The partnership that began between Lyra and Maestro has been fruitful. His ability as a musician and producer has helped to flesh out Lyra’s original compositions. Like the early bossa pioneers, Lyra’s music stems from the influences of literature, classical music (such as impressionist Ravel and Debussy), American musicals, cool jazz and, of course, Brazilian rhythms. Some of her pieces are more inclined towards folk and rock styles but are in essence bossa nova.

The recording begins with “Canto do paraiso,” a soothingly beautiful rendition of a Tupi-Guarani Indian song about paradise. The title track is an original love song that features the amazing Mauricio Einhorn on harmonica and Chiquito Braga on guitar, adding a certain country music charm. Written by Lyra’s father and Vinícius de Moraes, “Maria Moita” originally was featured in a play called Poor Little Rich Girl and is the play’s title character’s big moment to take voice, thus the lyrics are loaded and powered by Marcos Suzano’s pandero beat. The Beatles’s “Lucy In The Sky With Diamonds” is wonderfully arranged by Maestro and leads into Brazilian rock star Cazuza’s only bossa nova composition, “Faz Parte Do Meu Show.”

The offbeat “World Falling Down” , a tribute to Ella Fitzerald, is a collaborative work from Kay Lyra and Andre Madi, cousin of her friend, veteran composer Tito Madi. Maestro brought the melody for “The Night Will Fall” to Lyra to write English lyrics early in their relationship and really began their musical partnership. Lyra’s take on Jobim and De Moraes’s “Garota de Ipanema” breathes new life into the standard, while her version of Kousetsu Minami and Tadashi Kitajyou’s poetic “Kandagawa” floats liltingly from her lips.

Maestro’s composition, utilizing Cecilia Meireles’s poem “Epigrama”, is poignant yet spare, while “Interior” is Lyra’s own song based on the poem by Dorothy Parker and features the fantastic bagpipe playing of Eric Rigler, who is well known for his playing in films like Braveheart and Titanic. “Chaplin sem cor” is another collaboration with Andre Madi which echoes Lyra’s bilingual speaking style in a romantic haze. Lyra’s father cried when he first heard Chiquito Braga and Ana Antoun’s “Amanhecer” at a sarau (reunion), so it was a surprise when she was given the song to sing for the first time by the composer, which really shines under her spell.

The essence of bossa nova is something that can be applied to many types of music. This particular jeitinho or special way to approach bossa can be heard to great effect on Kay Lyra’s wonderful recording, Just A Silly Game.

Bandcamp Daily  your guide to the world of Bandcamp